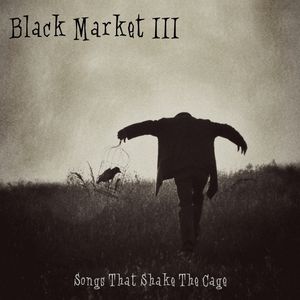 Black Market III’s new release Songs That Shake The Cage features Scottie Blinn powering through an album of mostly covers with a gritty growl, creating a rough and tumble landscape for his three piece band to ride rough shod over. Usually an album of covers is enough to stop me from giving it more than a listen, but “Mad Dog” Blinn grabs these songs by the throat and chokes the truth out of them.

The instrumental “Rumble” kicks off the record; it’s a nice warm up for Scottie’s guitar, Roxy Coverdale’ s bass, and Haley Allen’s drums to slowly get to know each other. With the second song “If I Can Hold,” the band cuts loose and Blinn finds his comfort zone, flashing crunchy ZZ Top-ish licks while belting out one of the best standout vocals on the record.

Social Distortion front man Mike Ness’ penned tune “All I Can Do Is Cry” follows, with Blinn slowing down the pace from the original, taking ownership of the song with his hard-hitting, road-seasoned vocals. By the time the fourth track rolls around, Black Market III is obviously feeling feisty as they roll the dice on a Tom Waits cover. Blinn puts a nice spin on the Waits tune by pulling at the lyrics with a back alley whisper, building on the tension before dropping some of the finest solos on the record. With his blues chops pronounced, there’s no doubt Mad Dog can play. He really takes it to task on “Hoist the Rag,” obviously feeling it when covering one of his favorites. The band’s love for Mr. Waits is evermore evident (they named themselves after the Waits number “Black Market Baby”) as they go after another one of his tunes “Lucinda/Ain’t Going To The Well” a few songs later. Again, the pace is slowed as they walk through this twisted Tom tale with a swagger and confidence that works.

About halfway through the record, bass player Roxy Coverdale takes a pass at the The Dead Weather song “Hang You From The Heavens.” As the band digs in with a head-banging stomp, Coverdale wails “I like to grab you by the hair / And hang you from the heavens!” Kind of sums up the record–it’s brass and fully loaded with ballsy, greasy blues and some kick ass rock and roll thrown in to boot.

More personal takes on a few other covers follow, filling out the record and spotlighting the three piece swagger.  There’s the Lead Belly song “Where Did You Sleep Last Night” and even the spiritual from before the Civil War “O Mary Don’t You Weep.” Yet, alongside the covers, Blinn also cooks up a handful of originals. With the instrumental “Psych Ward,” he lights up a surf/punk scorcher, letting his fingers do the talking. On “All of Your Love,” he trades vocals with Coverdale, unleashing another flurry of guitar bravado that’s not soon to be forgotten.

And that’s why this album works so well. Songs That Shake The Cage is fist full of obscure covers with sprinkling of hard-hitting originals, all heated up and served down ‘n’ dirty, with a fire and passion you can taste in each track.

It should be no surprise that the Black Market III has exploded onto the local blues scene. “Mad Dog” Scottie Blinn has fronted the Mississippi Mudsharks, Tiki Torchers, and other blues bands for over 20 years. With the kind of blues and vocal edge that earned plenty of local and international fans (several blues chart-topping European discs), he’s gigged with a who’s who of San Diego blues stars and most of the top touring blues acts to hit town since the ‘90s. Founded a year ago, the Market is his new band, a power trio with drummer Haley Allen, and bassist Roxy Coverdale (Blinn’s wife). They don’t have the reputation he does, but on the band’s debut CD, Songs That Shake the Cage, they lay down a ferocious groove like seasoned pros on every track, and give “Mad Dog” a chance to shine on a 13-track mix of covers and originals. Add his gravelly, soulful vocals and gut-level guitar licks and it’s great roots music fueled with power and emotion.

It is impossible to do anything but sing the praises of a disc that starts off with a bruising cover of Link Wray’s “Rumble” with all the knobs turned up, then moves straight into a fiery boogie cover of former San Diegans the Farage brothers’ (DFX2) “If I Can Hold”; this one was one of Country Dick Montana’s best Beat Farmer covers, and Blinn’s vocal and guitar assault gives it a Billy Gibbons twist. As if it can’t get better, there are two Tom Waits covers: “Hoist That Rag” has a pounding riff and careening lead solos wrapped around Blinn’s throttled-back, Waits sound-alike vocal. “Lucinda/ Ain’t Goin’ to the Well” is the other Waits song here, and it is a dark voodoo trip back and forth about being dragged to hell by Lucinda, with a power blues groove driving the proceedings slower or faster, as Blinn talks of temptation and perhaps redemption – but it’s blues so the listener isn’t quite convinced of the latter. It’s the best slow track on the disc.

Blinn’s originals stand up well with these and other standards. “Hard Times” slows things down as Blinn solos with a Leslie speaker effect. On the red-hot instrumental “Psych Ward,” “Mad Dog” tears into a surf/punk/blues scorcher like Dick Dale dueling with Stevie Ray and it is a finger-blistering standout. “All of Your Love” is a straight-ahead blues shuffle with trade-off vocals between Blinn and Coverdale and it features the best blues guitar solo on the disc – lean, mean, and clean. More of the same on the full-bore “Shake.”

Blinn isn’t just a top-notch blues rocker. He has been involved in programs teaching grade school kids music in summer camps and through his Rock Academy program. And, he has his own studio, record label (Double Barrel), and did a masterful job of producing, mixing, and mastering this pristinely recorded disc.

Songs That Shake the Cage is a show of force: uncompromising, grind-it-out blues rock done as good as it can be. Plus, it shakes the cage.

~~Black Market II is a new band currently touring through Europe for their first full CD set.  We were lucky enough to go listen to the trio during their show in Affligem and were seriously impressed.

Frontman of the band is Scottie "Mad Dog" Blinn, a phenomenal guitarist you probably know from The Mississippi Mudsharks.  He gathered around him two charming ladies: Roxy Coverdale on bass and Haley Allen on drums.

On this album, "Songs That Shake The Cage" they present a mix of songs that is dear to their hearts as well as original numbers.  In addition to solid Texas Blues played live, the mix of songs found on this album is surprising, and there are very successful covers included by Tom Waits, Wayne Walker and ... Johnny Cash. Fortunately they managed to capture that live atmosphere.  This studio album is nothing less than an absolute must for your collection.

Dave Good of the San Diego Reader labeled the group "the band to watch" and we wholeheartedly agree with him.

With his gravelly voice and brilliant guitar playing the sympathetic Scottie has two serious trumps in his hand.  The man is still an excellent songwriter, and the whole picture is correct.

The band perfectly captures both the stronger songs and the slower songs from beginning to end. The known traditionals like "Where Did You Sleep Last Night" or "Mary Do not You Weep" get brilliant personal versions administered. And between these classics are their own songs like the fantastic punk blues style, musical, catchy "Psych Ward", and the heavy rocking "Shake" are effortlessly upright.

It is a live band you must experience. We absolutely believe in this band and predict it has a golden future.  If you missed them then do yourself a favor and buy this album because it is in best of the rocking blues genre we like and admire this year.  This is a four star album with a "repeat" button guaranteed!