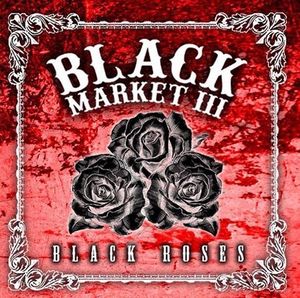 "Black Roses"--Nominated "Best Blues Album" 2014 San Diego Music Awards.  Black Market III's follow up CD to it's critically acclaimed "Songs That Shake The Cage", and the band has really founds it's voice!  Featuring the hits "When The Sun Goes Down", "Black Roses", "Comin' At Ya", and "Tin Can".  Roxanne Coverdale steps it up on her song "You", and with a rousing rendition of Otis Rush's "Keep On Lovin' Me Baby".

PHYSICAL PRODUCT TEMPORARILY OUT OF STOCK. Black Market III's critically acclaimed follow up to their debut "Songs That Shake The Cage". Nominated "Best Blues Album" 2014 San Diego Music Awards. CD features the hits 'When The Sun Goes Down', 'Black Roses', 'You', 'Comin' At Ya', and 'Old Man'.