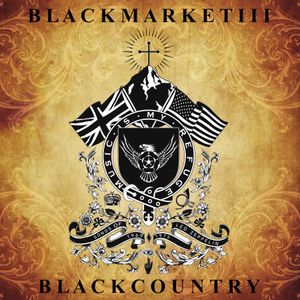 From day one Led Zeppelin was a mystical band, transcending the confining labels of genre.  Nearly 50 years later, the same mystique is as strong as ever in their music and legacy.  This recording is Black Market III's homage to their all time favorite band, the band most inspirational and influential to them.

"Of course writing, recording, and having our own music reach the world is above all the most surreal and satisfying, but actually producing, recording, and dedicating a full CD to the music of Jimmy Page, Robert Plant, John Paul Jones, and John Bonham was of the highest challenge.  It is the ultimate way for us to say THANK YOU to them."

"I don't know of anyone else who keeps Led Zeppelin exclusively in their car CD player.  Not to mention, both Roxy and I have shared in our deep love of this band since day one, and it reaches back to our childhoods. When we tour we start with Led Zeppelin I and chronologically work our way through them all...then we repeat."

These recordings speak for themselves, and the musicians all nailed their parts without sounding like they set out to copy the original.  All of the songs chosen are among BMIII's personal favorites...although they obviously love all of their songs!

"We are constantly digging deeper, finding more rare tracks and videos, and delving into the mystique and intricacy that is Led Zeppelin.  We have therefore made the selection of songs as diverse and sometimes as eclectic as the band is, choosing from most of their albums."

Special Thanks to Quilter Amplification for the amazing guitar and bass amps, Moze Guitars for use of the Martin 12 String, Boulder Creek Guitars for the Solitaire bass and six string, and MotorCult Kustom Clothing.

*NOTE:  International shipping rates have risen dramatically for us.  We apologize for the high fee for shipping directly.  Consider using your favorite internet outlet for music to purchase this item.
Double Barrel Records©2016

This is BMIII's homage to their favorite Rock band, Led Zeppelin. Painstaking in detail to deeper cuts, BMIII still manages to maintain their voice on these heavy weight classics.